Showing posts from July, 2017
Show all

The Importance of Branding Your School

This summer, have you gotten to share a Coke with Chris yet? How about with Emma? For the fourth summer in a row, the Coca-Cola company is hedging their bets that by putting your name or your friend’s name right on their bottle, you’ll drink more Coca-Cola than if they don’t. According to this Investopedia article, the move was one of the most successful marketing campaigns in the company’s history for three big reasons:
Consumers were prompted to participate and create online media content. The brand connected with consumers on a personal level. The words used in the campaign are powerful calls to action.
By the end of the summer of 2015, more than 500,000 photos were shared using the #ShareaCoke hashtag. Consumers created and shared more than 6 million virtual coke bottles. Lastly, Coca-Cola gained over 25 million additional Facebook followers as a result of the campaign.
As educators, we need to take our cue from successful business marketing and branding campaigns such as Coca-Cola’s …
22 comments
Read more

Teaching to the Test: When Teaching IS the Test 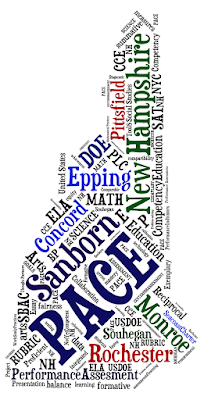 Last week, Christian Science Monitor’s Stacy Teicher Khadaroo wrote about how New Hampshire teachers have developed new ways to measure deeper learning. In her article, Khadaroo highlighted schools like Concord High School who have students simulating real-world experiences through enriching learning experiences known as performance tasks that become both the teaching and the testing at both the local and state level. She wrote, “Just outside Concord High School, a delivery truck has spilled its chemical supplies. The students’ mission: Investigate the properties of the spill and develop a detailed plan to clean it up safely. Teenagers wearing safety goggles squat down, sucking up samples of the clear liquid with pipettes. The simulated spill has been “contained” in a fish tank. But the students play along, first by developing some “testable questions” with their partners: How acidic is it? How does it compare with the properties of each substance on the truck? They’ll have four class…
Post a Comment
Read more

Embedding Mindfulness into the Schools

Stress can be a normal part of life, but too much stress can become toxic to the body, the mind, and the soul. This is true for both children as well as adults. Toxic stress can impede learning with students, erode productivity for teachers in the school which can lead to burnout, and compromise relationships between children and schools with parents.
According to the Mindful Schools organization website, “Because the roots of toxic stress lie deep in the nervous system, we need tools that go beyond the conceptual mind to directly target that system. To transform our habitual responses, we need to regularly practice our skills when we are not in “fight – flight – freeze” mode.” The organization goes on to recommend a two-step approach to infusing social emotional learning such as mindfulness in schools: The Development of Mindfulness“The development of mindfulness, a moment-by-moment awareness of our thoughts, emotions, sensations and surrounding environment.” The Development of Heartful…
Post a Comment
Read more
More posts